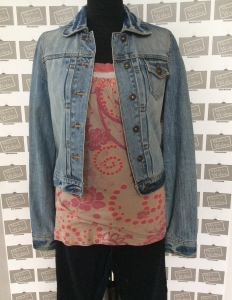 Anjili Mohindra played the character of Rani Chandra in the Sarah Jane Adventures, debuting in the second episode of series 2 through till the end of the series in 2011. This is the original costume worn in the episode ‘The Mad Woman in the Attic‘, the majority of which was filmed on location in Barry Island in May 2009.

The costume consists of a long sleeved pink and light grey patterned top and a pair of black skinny jeans. During the episode it was also teamed with a dark blue denim jacket which also came into our collection along with an additional top and jeans.

The same top and jeans were worn by Anjili in a couple of scenes of the episode ‘The Wedding of Sarah Jane Smith‘, specifically the scene in which Sarah tells the group of her impending wedding. This time it was paired with a light blue denim jacket, which was worn in multiple episodes. 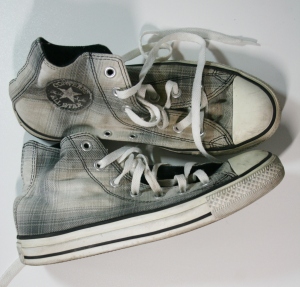 Also included in the collection are the converse trainers worn by Anjili which are grey plaid patterned hi-tops.