This costume was worn by Tommy Knight in the first series of the Sarah Jane Adventures for the story, ‘Eye of the Gorgon‘. 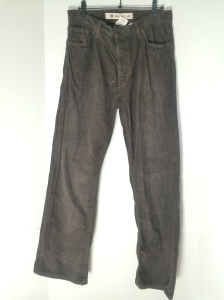 The costume is made up of a lilac t-shirt and brown Gap bootcut corduroy trousers which were teamed with a denim jacket during the story.

An interesting feature in the detail on the trousers, which demonstrates the authenticity, is the BBC costume stock number and the handwritten Luke on the label. 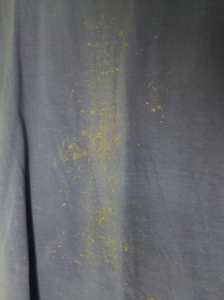 Curiously both the t-shirt and the trousers have had simulated dirt added to them for reasons we are not sure about. A similar t-shirt was also worn by Tommy Knight during the Series 2 story ‘The Last Sontaran‘, which is also in our collection this time, but was teamed with a pair of denim jeans.