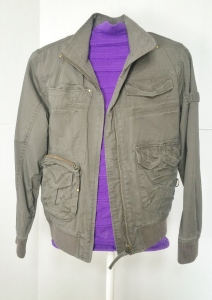 This jacket was worn by Tommy Knight in the first series of the Sarah Jane Adventures in the story ‘Warriors of Kudlak‘.

The episode was filmed in a variety of locations in June and July 2007. Notable locations in which the jacket can be identified include Womanby street and Evolution night club in the Red Dragon Centre, Cardiff Bay. The street scenes saw Clwb Ifor Bach used for the Combat 3000 exterior and Evolution allowed the production team to create the interiors for Combat 3000.

Tommy Knight also appears to have worn the same jacket for the scenes filmed at the New Theatre for ‘Secrets of the Stars‘ (2008) over a plain red t-shirt.